St. Thomas, U.S. Virgin Islands. Lead overtaken, placings the same and placings gained tells the story on the scoreboard and more importantly of the racing on the second day of the competition in the St. Thomas Yacht Club (STYC) Invitational Regatta. Eight teams representing the USVI, USA, and Sweden sailed six races in 10 to 12 knots of breeze with occasional higher puffs fueled by passing clouds. Like yesterday, the fleet completed five round-the-buoy races in Jersey Bay off St. Thomas’ southeast coast and finished the day with a round-the-islands course circling the James islands. Today, it was the USVI team headed by two-time Olympic sailor, Cy Thompson, with Addison Caproni at the helm and Rian Bareuther on jib that took over the lead from the USA’s Dave Franzel and crew.

“The choice of whether to go left versus right through the Current Cut channel at the end of the day’s last race is tricky. Cy learned from yesterday and headed to the right where there was less current and better wind and maintained his lead. In all, his team sailed well today,” says Franzel, whose team is now in second place. As both director of the host St. Thomas Sailing Center and regatta director, he adds, “there are many really good sailors we hope to invite to this event in the coming years. Overall though, I envision this regatta as one that people enjoy just to participate, while others sail because it’s quite competitive. This makes it interesting to everyone as a result.”

A crew swap due to a non-sailing related injury saw the USVI’s Mike Finley’s team maintain its third place, yet do so with an impressive 4 second-place finishes in six races. Club manager, Greer Scholes, traded deskwork for the tiller after a few years of racing hiatus with superb results.

“I was nervous at first until we started racing. The conditions were perfect. We had a really good time,” says Scholes, who in addition to Finley sailed with Morgan Avery as crew. 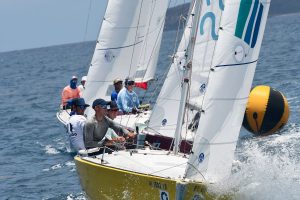 It was Avery, using his skills as a boatbuilder, with fellow Club member, Chris Rosenberg, who worked out the design, to create the IC24. In essence, a used J/24 hull is fitted with a new Melges 24-style deck mold that is wider and has no traveler. There is an inside track for a genoa, but no spinnaker or bow pulpit, and the transom is closed. The stanchions are lower and there’s a cover on them for comfort. Started in 2000, after hurricanes decimated the Club’s fleet, the IC24 one-design class debuted at the 2001 International Rolex Regatta, now called the St. Thomas International Regatta. The class winner that year was the USVI’s Mike Williams.

“The IC24 is simple to sail, easy to handle and comfortable to sail,” says Williams, who with crew Cindy Sydney and Charlie Knape, moved from 7th to 5th place after today’s racing. “It’s really competitive too. In today’s last race, at least five boats were all within two or three boat lengths of each other.”

Racing concludes Sunday with four races planned. The first start is 11 a.m. An Awards Ceremony will follow in the afternoon.