St. Thomas, U.S. Virgin Islands. The beauty of one-design racing, where all sailboats are the same, is that it is easy to see who the leader is. That is, the first boat over the finish line wins. No handicap calculations are needed. Yet on this first day of racing in the second annual St. Thomas Yacht Club (STYC) Invitational Regatta, the contests between the 8 teams representing the USVI, USA and Sweden aboard Club-owned IC24s were so close – by a bow length or less, that it made for seat-of-the-pants spectating and world-class competition. With this caliber of racing, its easy to see how this new event will soon grow to attract even more of the planet’s top sailors.

“It was a close day with us and Dave (Franzel),” says the USVI’s two-time Olympic sailor, Cy Thompson, who with Addison Caproni at the helm and Eric Anaclerio on bow tied in points with the USA’s Franzel’s team. Thompson and crew, however, finished second on the scoreboard in a tiebreaker when Franzel’s team won the last of the day’s six races. “In that last race, it all came down to sailing through Current Cut. The trick was whether to sail through and try to get away from the land and get pressure. Or, to sail close to the shore out of the current and hope the pressure fills in.”

This year’s race format features a series of short sprint-style windward-leeward courses followed by a final round-the-island type course off the east end of St. Thomas. The 10 to 12-knot winds out of the ESE proved perfect conditions for these courses.

“It’s a great break from the windward-leeward racing,” says the USVI’s John Foster, about the day’s last race. Foster sailed with Chuck Pessler and Lawrence Aqui as crew.

New to this event too was having teams rotate among the boats after every two races.

“The advantages were that some boats had their main and jibs set up better than others. The challenge was that we had to adjust the sails to the way we wanted them when we changed boats. Overall, it was a great day, with good racing and lots of fun, competition and camaraderie,” Foster adds. 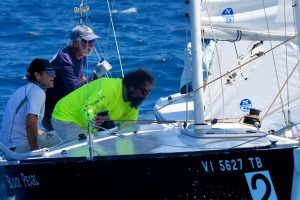 While most teams experienced smooth sailing, albeit, for competitors close behind, one crew member had a little extra so-called fun.

“I got to go for a swim when I least expected it,” says the USA’s Dennis Nixon, who crewed with Kyle Waldner with Team Sweden’s Peter Sernhede. “In the fifth race, we rounded the windward mark, hit another boat and had to take a penalty turn. We went into the turn too soon after the mark and there I was hanging out holding the jib one minute and, in the sea, the next.”

Nixon grabbed the boat’s rudder, climbed up the swim ladder and the team finished the race.

“We worked out the rough spots today and tomorrow we plan to move up the ladder – the scoreboard ladder, that is,” says Nixon.