St. Thomas, U.S. Virgin Islands. The second annual St. Thomas Yacht Club (STYC) Invitational Regatta will take place on May 14-16, 2021. Run out of the Club’s St. Thomas Sailing Center (STSC) in Cowpet Bay, this event will welcome 8 teams representing the U.S. Virgin Islands, U.S.A., and Sweden. COVID-19 safety precautions will be in place per the USVI Government’s executive orders. For example, crews are limited to three in the IC24 and will race jib and main, thus eliminating extra crew needed to fly a spinnaker. Plus, competitors will social distance and wear facial buffs. Following on the heels of the successful St. Thomas International Regatta (STIR) in March, the only major Caribbean regatta held so far this year, the STYC Invitational Regatta continues to promote safe marine tourism and the U.S. Virgin Islands’ signature assets of its warm steady tradewinds and surrounding seas. What’s more, the regatta by virtue of its fleet of Club-owned race-ready boats and St. Thomas having one of the best airlifts in the Caribbean continues its evolution to becoming a larger world-class international event in the future. 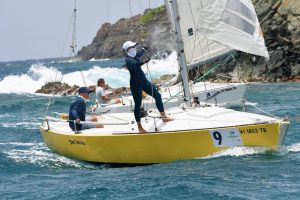 “Due to COVID, this year’s version of the STYC Invitational will not be an intensely competitive regatta where 11 clubs from the Caribbean and around the World send their best teams to compete for this Championship. Nonetheless, we will have eight teams including one from the Marblehead Yacht Club in Massachusetts and one from the Sunneskars Boatsellskap Club in Sweden. In addition, last year’s champion and this year’s STIR champion in IC-24s, the St. Thomas team of Chris Rosenberg, Cy Thompson, and Addison Caproni will be competing,” says Dave Franzel, director of the STSC.

The 8 teams will compete in up to 16 round-the-buoy races over the three-day event. Racing will be in Jersey bay on the southeast of St. Thomas, making much of the racing visible from land.

“What I like about the IC-24 is that we have succeeded in creating a class in which the speed differentials between boats are small. The difference makers are teamwork, sail trim, and tactics which are the fundamentals of the sport. When you win an IC-24 event it feels good! Also, a major component of the class is its low cost. This opens up high caliber racing to a broad audience,” says Rosenberg.

Another St. Thomas-based team is headed by Mike Finley, who will be sailing with Morgan Avery and Chris Curreri.

“Hopefully, we sail smart and race clean against the other competitors. The best thing about one design be it an IC-24 or any boat it’s close racing,” says Finley, speaking about his team’s strategy for the STYC Invitational.

The Regatta will also commemorate a perpetual trophy awarded to the winning teams dedicated to Rudy Thomson and Dick Avery for their long-standing contributions to STYC and Olympic racing inspiring sailors of all ages. 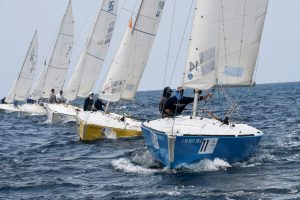 The U.S. Virgin Islands Department of Tourism is a strong supporter of sailing events as important contributors to the territory’s marine tourism sector. The DOT sponsors the STYC Invitational as well as STIR in March and the youth-focused International Optimist Regatta, set for June 14-20, 2021.

Regatta organizers are also pleased to announce that Michelob Ultra, Stoli, Milagro, and Bacardi Rum, distributed by the West Indies Company (WIC) are the event’s official beer and spirits. These premium branded beverages will be served according to COVID-19 safety protocols at the Club during the event. Signature drinks for the 2021 STYC Invitational include a Bacardi Rum Punch. Michelob Ultra will also provide coveted sailors bags, which include branded masks to keep sailors safe.

“We are pleased to sponsor the STYC Invitational Regatta as our premium brands pair perfectly with activities like sailing,” says Keiya Canton-Brooks, WIC marketing director. “For example, Bacardi’s ‘Do What Moves You’ focuses on engaging consumers to express themselves and connect through their passions – like sailing and their shared love of this rum.”

Sailing is not only a great way to socially distance, but a positive activity for the mind and body. The STSC offers several instructional programs for adults, residents, and visitors alike. Class registration comes with a 30-day Bluewater Membership, where students can use and enjoy Club facilities and amenities.

“Beyond the regatta, we’ll offer learn to sail courses every month to introduce new sailors to sailing on the IC24. This opens a whole new world of options on the water. Those who complete the course, or those who are already experienced sailors, can join the Club and use the boats to explore the beautiful waters of St. Thomas and St. John. We have groups going out regularly to adventure around the islands, using our fleet to sail to remote bays to hike, snorkel, and explore with old friends and new. We’re also introducing shorter skills clinics to help our sailors become more confident with specific skills like mooring, close-quarters maneuvering, anchoring, reefing, heaving to and more. There has never been a better time to join the Club, get out on the water, and start making the most of everything the USVI has to offer,” says Dave Walker, who will take over the directorship of the STSC in June.

For more information about the STYC Invitational Regatta and STSC sailing lessons, call (340) 690-3681, or visit: https://stthomassailingcenter.com/